Tullibardine 1488 Traditional Ale is a cask aged ale from Tullibardine’s brewery, aged in barrels from their renowned distillery. This 500ml bottle contains a medium bodied beer that weighs in at 4.5% ABV, making it less of a force compared to the Whisky Beer produced by Tullibardine. While this beer may lack the whisky wow-factor of other similar styled beers, its complexity of balanced flavors do make up for it; however, the cost makes this beer best as an occasional special treat as opposed to something to consume several of in one night.

This Tullibardine ale is named the Traditional for good reason: it is brewed like a traditional 90 shilling Scottish ale. However, the fact that it is oak aged, while adding depth and dimension to the flavours, makes it not so ‘traditional’. While it has a more robust malt backbone than Tullibardine’s 1488 Whisky Ale, the malt flavours are somewhat softened by the oak aging, leaving the malt notes somewhere between a fruity and creamy sweetness — this is not typical of traditional 90 shilling scotch ales, which tend to have a more profound flavour of roasted malt.

Because of this, it’s difficult to pin down this beer; it’s somewhere in between a typical oak aged beer and a traditional ale. In spite of this, the beer doesn’t suffer from overcrowding; in fact, the flavours are quite well integrated, balanced, and complement each other. It’s reasonably light, yet creamy and fulfilling; it has a malted sweetness that is subtly fruity, yet the oak/wood/whisky notes even this out; it has a medium-long length, yet is quite crisp — the finish remains consistent. All in all, the Tradition Ale is an enjoyable beer, inoffensive in any way, and well balanced; you could certainly have more than one, although your pockets would have to be quite deep!

Compared to the other Tullibardine 1488 sampled, the “Premium Whisky Beer”, this traditional recipe is much more successful in that it is well balanced in key areas. While it is by no means a heavy or strong beer, it boasts a variety of notes that can be determined from smell, taste and finish that are most certainly pleasing to pick up on. Served in a 500ml bottle, this beer is a rich chestnut colour with a light off-tan head. The nose is floral and fruity with a rich helping of malt, and a mild mix of vanilla and whiskey – the latter from the cask aging. The body is, as previously mentioned, lighter than expected yet constant with a pale ale. Not too watery, but certainly well carbonated. The taste was certainly strong in malt, possibly nutty in flavor, while it posessed a certain sweetness of vanilla or toffee to balance it from the malt and whisky. The finish of this beer was equally complex, certainly left a dry, almost bitter malty taste on the palate which softened into one where oak lingered the longest. This beer ranks highly in my opinion because it manages to keep all the ingredients from overpowering another, unlike the whisky beer produced by the same brewer. Unfortunately the only drawback is the high price for this beer, considering it comes in single bottles and is an import. It would seem then that this beer is best saved for an occasion that is special as opposed to a beer to have on a whim.

For someone, like myself, who is not a huge whisky fan, this particular Tullibardine ‘Traditional Ale’ blend is much more akin to my tastes.

From initial observations, however, it appeared this beer would fall flat. Greeted by a scent more reminiscent of a weak pale ale, I was concerned this Tullibardine creation would fall on hard ground, similar to their ‘Whisky Beer’. However, upon tasting, I was glad to find these concerns were not warranted. A rich, smokey flavour perfectly coincides with its dark, murky appearance that turns out to be very easy to drink due to its low amount of carbonation. With this strong flavour in tow, the finish leaves the drinker with a consistent hint of roasted malt, which may not appeal to some, but in the right amount can really add character to a beer that may otherwise lack an identity.

Although the scent does not send your senses jumping, the other qualities of this beer act as redeeming qualities, and its smoothness allows for an enjoyable experience after more than 1 bottle. However, for the price, there are certainly better options out there that can create a similar experience with a more unique flavour. An Innis & Gunn Original would be my preferred choice. 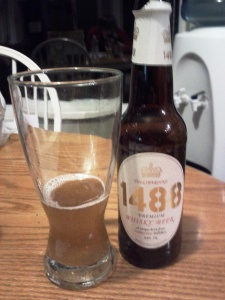 Tullibardine are best known as a distillery who produce a highland single malt scotch, but they also produce a collection of beers. One of which is their award winning strong English ale, the “Tullibardine 1488 Premium Whisky Beer”. This bottled beer is strong at 7% and certainly one of the most expensive we’ve seen for its size. The process in which it is made is similar to the Innis & Gunn style of aging the ale in casks. The Tullibardine brewery age the ale in freshly disgorged casks for up to twelve weeks to add not only the richness of the oak barrel, but the inclusion of whisky that had been absorbed by the wood orginally. It has a strong nose, body and flavour, if whisky beer is your niche perhaps this one is up your alley.

****
As a whisky enthusiast and Tullibardine advocator, I can’t help but love the idea of this beer — I became quite excited when first hearing about it. My excitement was some what dampered when I saw the price — even with $1 off, it’s almost twice the price  of the original Innis & Gunn, which is a relatively expensive beer in its own right. Money aside, I had to try this beer, and have done so several times before we conducted our tasting. Perhaps this explains why I like this beer so much more than James and Tristan; the Tullibardine Whisky Ale seems to be a beer of acquired taste. I think my familiarity with whiskies as well as this beer in particular permitted me to enjoy it more than the others.

With that said, despite being an enjoyable whisky beer, assertively flavoured with a delicate touch of Tullibardine sweetness, this whisky ale is not for everyone, and even for those that it does work for, it’s not quite worth the price — I’d much rather have an Innis & Gunn in each pocket. The subtle complexities and obvious whisky notes of this ale are to be enjoyed but once in a while. One is enough, you don’t find yourself wanting another anytime soon, and it’s a nice treat  to sip this unique beer from time to time. As one’s palate becomes accustomed to its flavours,  I believe that it gets better and better with each visit.

While  whisky beers have become a favorite of mine, as with the brewery Innis & Gunn, I cannot help but find this particular ale of Tullibardine to miss the mark… or rather overshoot it. Instead of delivering a well rounded whisky beer that truly compliments the other ingredients, I’m left wondering what else could be in the ale aside from the oak and whisky. Upon first sniff I was overwhelmed by the strength of the whisky and could not locate the vanilla that the brewer claims is in there. The ale, honey or light amber in colour, was quite opaque and appeared more of a wheat beer than a traditional ale. It was a strong bodied beer to be certain, but the whisky taste seemed to overpower the sweetness of the vanilla or nuts that were added. The finish was what really fell flat for me. There was only the slightest amount of spice to the ale, and the whisky taste was certainly short lived. Personally this beer was too heavy on the whisky side and poorly balanced unlike their traditional 1488 ale. Unlikely I’d buy this beer again, even if the price dropped to a more reasonable amount.

To continue the whisky beer theme, we offer you an immediate comparison to Innis & Gunn with Tullibardine and their version of whisky-inspired beer. Offering a similar scent to the I&G 21yr, yet with a more obvious citrus presence compared with hints of vanilla, it is a perfect invitation to try this beer. Initial impressions are good, with a low carbonation that creates a smooth texture, but also makes the beer quite heavy, lowering its consumption factor.

What causes this beer to fall, in my eyes, is the taste and finish. With the Innis and Gunn, the whisky qualities are subtle, adding to the character of the beer. Tullibardine, on the other hand, has a domineering whisky flavour, overpowering any other flavours which may be present. It is powerful enough to take away from the flavours naturally occurring in the beer and replace them with a glass of whisky. The finish does not help matters by dying extremely quickly, leaving the drinker wondering what happened?

For those who like their whiskys, this may be the beer for you, as it essentially feels like having a very large, cool, whisky. For all others, I recommend trying this once, but no more than that.