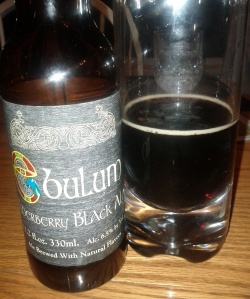 Last in our Historic Ales Of Scotland collection from Williams Brothers. This review came later than the others since, considering how dark it is — Guinness black! — we tasted it later in the evening. As you ought to know now from what we’ve said about the Williams Brothers collection, it uses a specific historical ingredient — one which was used for centuries of beer fermentation before it inexplicably ceased. In this case, elderberries are used!

The nose is quite inviting. As one would expect of a dark beer, it’s relatively malty, making it fairly sweet; however, complementing the sweet malt smell are notes of fruit — elderberries, blackberries, blackcurrants, etc.. Moreover, the beer must be using roasted malt, because there are notes of coffee and burnt chocolate. This is typical of stouts and porters, but a beer need not be a stout or porter to contain roasted malt. These flavours likewise fall on the palate, with notes of blackberries — probably elderberries too, but I don’t recognize them as well — and roasted malt being the clearest expression of the beer’s unique character. While I initially found the nose quite profound, the taste blew me away — this is a highly flavourful, well integrated beer.

Although quite dark, even darker than the Big Smoke Ale we just reviewed, it is fairly easy drinking. This is likely why it’s not considered a stout/porter — the body just isn’t there. In other words, there are flavours typical of stouts/porters, but the texture just isn’t there. While I’d prefer a bit more body to it — the flavours deserve some extra substance — it’s refreshing to have such a dark beer that doesn’t weigh you down. The finish is quite long and pleasant; however, after just a few seconds the sweetness instilled by the elderberries — the fresh and fruity sweetness — dies off and leaves only the taste of the malt.

The Ebulum Elderberry Ale is quite delicious, and one of the best beers we have tasted thus far. Also, it’s the beer we have come closest to meeting each other’s scores, with the diversity of our scores being merely a few points apart; this certainly speaks to its approachability, since we clearly have different tastes. While I prefer the Fraoch Heather Ale, the Ebulum Elderberry Ale is a close second from the Williams Brothers. It’s too bad that they don’t release singles of this guy; I’d love to try it again, and I guess I’ll just have to wait until the collection comes back next Christmas.

My favourite of the mixer pack, this beer was such a unique surprise that its originality won me over! While I have not had much exposure to elderberries outside of their incorporation into certain bake goods, this beer changed my opinion of them. And it’s not just elderberries, as mentioned by Kamran there are a variety of fruity/berry flavours contained in this dark beer.

The fruity sweet nose is also herbal and malty and frankly the best part of this beer. Only a couple of beers have beat the score I gave for the scent of this beer which says a lot. The darkness of this beer makes it appear to be heavier then it actually is, but in reality it is a smoother less creamy texture than Guinness or other stouts or some porters. However, if asked what type this beer more closely resembled, either a stout or porter, I would have to say it is closer to the latter. The taste of the berries is unmistakable amongst the  malty tones, allowing for a sweet refreshing ale. The finish is not prolonged. It is smooth and almost chocolaty from a roasted malt, yet simultaneously herbal. A unique and enjoyable combination.

This beer is more than a one-off. It’s complex, smooth and it’s memorable! Good for a session ale with friends, it further proves that not all black coloured beers need be “liquid bread” and super filling.  I look forward to its return in Canadian stores. 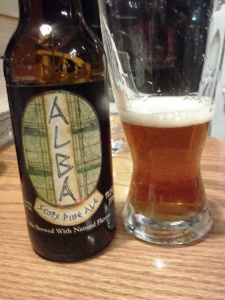 The Alba Scots Pine Ale is the third ‘historic ale’ from Williams Brothers that we tried. As the name suggests, it uses Scottish pine and spruce in its fermentation. This style was originally brought to Scotland by the vikings and was still popular until the late 1800’s. The pine was boiled down with the barley, and the spruce was added shortly before fermentation to infuse themselves into the brew.

The most intriguing aspect of this ale, for me, is its aroma. Along with a subtle sweetness of vanilla and oak, there is the smell of skittles! Not any particular colour of skittles, but just skittles in general. This note of skittles isn’t overwhelming, but it’s certainly noticeable. This candylike flavour continues on the palate, while the malt gives it a similar kind of vanilla/wood sweetness typical of the Tullibardine beers we previously reviewed.

While the body has a nice mouthfeel and texture, the ale is surprisingly heavy, in a sort of odd way. I wouldn’t want to drink too much of it — two or three tops. The finish leaves one wanting more, as the flavours dissipate rather quickly. Perhaps this is just because the initial taste is so much more intense. All in all, an enjoyable beer that I hope to get a hold of again.

I found this particular historic ale to be a bit of a surprise. It’s aroma was sweet to the nose, as well as slightly malty and even fruity, though I believe that would be the influence of the spruce. As the picture shows, it is a beer with a rich colour. It is crisp, but somewhat heavier than typical ales – so perhaps not one to overdo. When we tasted the beer we felt it was sweet and almost had a taste like Skittles, which was covering a light maltiness to the beer. The short lived finish was what brought down the score on my review card, mainly because the aftertaste is rather brief for a beer with such strong flavors and aromas. Overall though I’d say it was a solid beer and a pleasant surprise to taste, and I look forward to having another in the future.

I tell you, the Scots really know how to brew unique beers. Continuing the tradition of “Let’s brew a beer using random plants we find on the ground”, the Alba Scots Pine Ale is actually surprisingly good. I was really able to notice the pine in the light, fresh aroma that reminded me of a forest on a cool day. Although not terribly crisp and relatively heavy, this ale was still easy to drink due to its refreshing nature. I particularly enjoyed the flavour, which was heavily influenced by the pine, and created a sense of sweetness, reminding a lot of eating skittles. Contrary to my fellow reviewers, I found the sweetness in this particular beer lasted an appropriate amount of time, definitely encouraging you to take another sip.